I grew up in the countryside and forests of Värmland, in the midlands of Sweden. After the Culinary School I moved down to Gothenburg and started to work at restaurant Sjömagasinet together with Leif Mannerström.

I also worked as junior Sous Chef in one Michelin star restaurant Richard Corrigan at Lindsay house in London. At Charlie Trotter´s in Chicago, also as a Chef at the Swedish Embassy in Rome, to well-known restaurants in Stockholm as Vassa Eggen & Erik´s and as Head Chef at venerable Ulriksdals Wärdshus.

I was a member of the Swedish Culinary Team for 5 years.

Some of the various assignments for the Swedish Meats, and participates in redesign of the butchering schedule was:
– Lectures about Meat in connection with the Swedish Chef of the Year race.
– Cooperation with Svenskt Butikskött & the brand “Smak av Gotland” (“The Taste of Gotland”)
– Developing recipes at “Smak av Gotland” website.

Since 2015, I am an ambassador for Santa Maria’s premium Tellicherry Black Pepper in Sweden.

I have been responsible for the Governor of Gotland Summer Dinners for 400 guests for several years.

Also I was one of the five responsible chefs for the Bocuse d’Or gala dinner for 650 guests at the City Hall in Stockholm. Bocuse d ́Or Europe, in Stockholm. 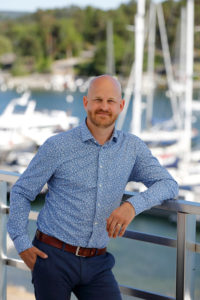